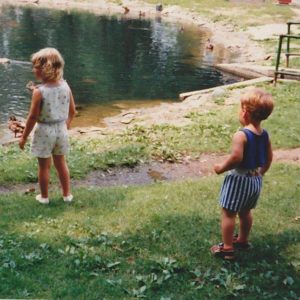 (This is a picture of my brother David and I, circa 1989 aka the good ‘ole days, playing by an open body of water, with ducks nearby and probably duck poop on the ground… we’re still both alive in case anyone’s wondering – oh and look there are pokey weeds how ever did we survive? <insert snarky look>

As I’m sitting here this rainy day in the campground, drinking my good ‘ole American Root Beer, I thought to myself, “What shall I do today while it’s raining?” If you’re curious on what I decided, and you’re not throwing your hands up in the air in protest about the title of this little gem I’ve authored, then grab some popcorn and get ready, because it’s about to get real.

I have an idea, let’s deregulate child care.

I’ll pause while you insert whatever emotion your feeling. But here’s the emotion I’m feeling. Sheer freaking excitement. Like Julie Andrews running up a mountain in The Sound of Music excitement. “The hills are alive with the sound of freeeeee-dom!!! Ah-ah-ah-ah.”

Before anyone stones me in protest, let me explain.

Child care is already unregulated, in public schools. No, that is not a typo, it’s true. In Minnesota, many public schools offer school age care or “Free” (I use quotes because nothing in life is free, someone is paying for it and it’s our tax dollars) Preschool. And it’s completely unregulated. How would I know? I was the Coordinator of one such program, in New Ulm. While there were certain guidelines we followed as best practice, such as ratios, the staff was comprised of a mix of para professionals needing Summer work, as well as High School and College students. But wait there’s more! Every week we walked across the street to the swimming pool. It was the Wednesday morning activity. Doing a slow burn as a licensed provider yet? Grab some water, because there’s more. The only training required was CPR/1st Aid and of course a background study. No regulations on equipment, no one looking at the building or doing a walk-through before children were in the area, none of that. Yes schools follow Fire, Food, and Building Code, but so do licensed providers. So that is outside of licensing.

Keeping all of that in mind, I’m now going to drop another little crumb of food for thought. A green crumb – cash. I keep hearing the argument, “well we have to follow these guidelines for child care, because it’s part of the Federal Block Grant, that funds CCAP”. If you have anything in your mouth you might want to swallow, because guess what… when I was the Coordinator of Kids Connection, a public school school-age child care program,we billed to CCAP. I’ll sit here while you let that sink in for awhile…

Before I move on to the source of my rage and frustration, let me just recap what I just mentioned. Public dollars are funding child care for children within a public school, where they are exempt from licensing requirements we as private business owners must follow and have little to no requirements for education aside from basic safety checks such as CPR/1st Aid and a background study.

But wait there’s more – Preschool. While the Governor spent the last 8 years running around the state preaching the “epicness” (sarcasm) of his grand plan for Universal Preschool, a silent crisis began brewing – a child care shortage. By the time it came to full fruition, it was too late. No one could stop the hemorrhaging… or perhaps some just didn’t want to. In what I refer to as an attempt to “create an equal playing field in the eyes of the public”, private providers could gain access to dollars through Parent Aware as well. While that seems fair at first glance, what often isn’t written about or disclosed in news articles, is that private providers have endless hoops to jump through to access these dollars, while Public School Programs and Head Starts do not. And since I’m on a role here, I’ll also disclose this little tidbit. Out of the 136 Head Start Programs in the state of Minnesota, only 103 had any public record of having been inspected since 2011 (according to public DHS data compiled by The Joy Initiative). The problem is, many Head Start facilities, do not fall under the classification of “legally exempt” because they also provide care for Infants and Toddlers. <Insert forehead smack>

To all of this I say, “It’s time to deregulate child care”, because it already is. I believe there should be firm guidelines such as mandatory background checks for child care providers and 1st Aid and CPR. I’ll even agree to AHT and SUID.

And because I know there will be some resistance, to this concept, I’ll end by taking on a few points of resistance that I’m sure someone will bring up:

1.       If Minnesota deregulates child care, children will be unsafe! To this I say: Children are already in spaces that are for the most part, unregulated. Not only in Public Schools, but in private homes where 12 year olds are most likely as I type this, serving as a Nanny for the Summer for multiple children. Furthermore, if that were the case, then we should be hearing a public outcry for regulations for Public Schools providing Preschool and School Age Care… but we’re not. Oh and let’s not forget the hundreds of posts on Facebook and Craigslist from parents desperate for care that a simple search with the good ‘ole internet will reveal – because Craigslist and Facebook are safe for choosing child care… (again sarcasm), but parent’s have no choice! Because the lack of legal providers is because of a state agency.

My counter point to this argument: The overregulation of child care in Minnesota is contributing to children being unsafe, because quite frankly, no-one wants this job anymore – and the statistics prove it.

2.       If Minnesota deregulates child care, who will protect children if there is a complaint? Here’s where I stand on this issue: There are already plenty of systems set up to protect children in this state; systems such as CPS, not to mention food safety/food code which we all already have to follow. However, in any other business, if you don’t like something that a business has done you do have an option and it’s called a lawsuit. My parents own a scaffolding and aerial lift company in Illinois. There are less regulations with that company, where people literally hang off the side of a building hundreds of feet in the air than in my daily work – hey at least you know what OSHA is going to nail you for unlike DHS. On top of which, if we are afraid of children being hurt while in child care, then why do we have loopholes in this state at all? If we are going to use that argument, why is it allowable for an individual to provide up to 30 days of care for more than one unrelated family? Who picked 30 days? I’ll tell you who, the government. And I would be willing to bet, there is no rhyme of reason for how they came up with that answer… I won’t hold my breathe waiting for an answer for the Government, because I want to live to see another day.

3.       If Minnesota deregulates child care, what about those parents who want those securities? This is always a mind-boggling argument to me. Just because something is on paper, does not mean that someone is following through on it. A piece of paper does not stop people who want to do something bad from doing it, nor does it stop accidents from happening. If you want quality, then pay for quality. Seek out a program or setting or provider who has those qualities. Because the truth is, you should be checking in with whomever is caring for your children anyhow. And again, there are many laws already in place outside of licensing regulations to protect children. Why are we making this so complicated in this state? Let’s return to the Free Market Competition.

I’ve saved my favorite for last.

4.       If Minnesota deregulates child care, who will protect the rights of families? Families have little to no rights under current regulation.

*Want your child to drink out of a water bottle in a center based setting? Too bad, the law says we can only use single use cups and drinking fountains. Which means I have no idea how much water Johnny has had on a hot Summer day.

*Want your child to be held while they sleep because they are colicky? Sorry to inform you that the law doesn’t allow for that either and we must place them firmly on their back to sleep in a crib, with nothing but a pacifier, as soon as we are able. Which means Susie will cry most of the day and never sleep.

*Want your child to run barefoot through the grass because you feel that’s what research shows is best? Most centers won’t allow it because its a liability and we could get a “Health and Safety” violation. Josh Jr. will never know the feeling of cool prickly grass underfoot as he runs, because he’ll be in a whole foot, closed toed shoe for his whole childhood, straight from the bubble wrap factory.

I could go on and on. But at the end of day, the truth is in this one disgusting statement:

The laws in Minnesota are biased towards publicly funded programs and against privately owned family and center based businesses who must follow asinine regulations that strip parents, children, and providers of their dignity by assuming we are all idiots. But don’t worry, Samantha or Bobby, the 12-year olds down the street can and will gladly watch your children without any sort of regulation. And you know what? I think they should be able to! Because this is America and parents should have the right to choose!

It’s simple: You either hold everyone to the same standard or you remove the standard.

I’ve thought about this and researched for many years. If you feel otherwise, I encourage you to drop a line in the comments and I’ll share my thoughts. I enjoy having honest conversations that reveal truth.

Let’s deregulate child care, one myth at a time.