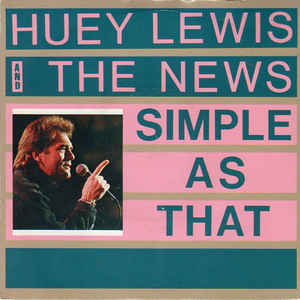 I was sitting there at the table in Michigan, Huey Lewis and the News playing from Spotify – the song “It’s as Simple as That”. My brother David was on my right, my Dad and my husband Josh on the opposite side of the table. We were in the midst of playing a favorite card game from my childhood, Rummy 500. My Dad, brother, and I were all singing along, each with a different piece of the harmony. The song was nearing the end and we were singing together:

“Before you know it the kids are all grown, And married off with kids of their own
And it’s all in the past
It’s as simple as that”

And that’s when it hit me.

A wave of memories began to flood over me and I felt sad. This often happens to me. Happy memories from my childhood are attached to sadness. I haven’t yet quite figured out why; perhaps it’s sorrow over a time that is passed. Or perhaps it’s the longing for a time in my life I know is over. Whatever the reason, I was sitting at the table thinking back to this memory of my Dad and me.

My Dad had this old blue Toyota truck; it was a stick shift. One of my very first memories I have, is riding with him in this truck through the country to pick up a supply order. The truck had a cassette deck in it, and I can still very vividly see the khaki end of the Huey Lewis and the News tape, sticking out from the deck. I remember pulling into the parking lot and hopping out. When my Dad had picked up his order, we stopped by the vending machine on the way out. He bought me a Hawaiian Punch. We got back in the truck and he switched out the cassette in the tape deck. The tape was bright white, with a citrus orange label, and the words printed in yellow read “Bert and Ernie”. I remember sitting in the middle seat, singing along with my Dad “Rubber Ducky, you’re the one. You make bath time lots of fun. Rubber Ducky, I’m awfully fond of you. Boop boo bee doo”.

As I sat at the table, the last night of vacation, I started to wonder, if I had made the right decision. In 2007, I graduated from college in New Ulm, Minnesota. I had decided to not take ‘a call’ (long story we don’t have time for right now, but essentially you get told where you’re going to teach, anywhere in America and you go teach there…. more on that later). Anyhow, I had decided to stay in New Ulm. I waitressed at the Kaiserhoff and the New Ulm Country Club, and started grad school.

Everyone was shocked… possibly even myself.

As a child, I hated being away from home. I cried and had to be picked up from my first sleepover at the age of 6 –

On a side note, playing a movie about a little penguin who gets lost from his family is not a good choice for a bunch of kids on their first sleepover. Seriously wondering which parent was like “I know! Let’s watch Scamper, that will be a good choice. It’s so fun and uplifting as the penguin panics and wonders if he’ll ever see his little penguin family again and we have all these children here without their parents.” Solid choice. NOT! And I didn’t even have my stuffed rabbit Thumper… sigh.

Anyhow, I hated being away from home. Maybe it’s because my Mom was sick and almost died when I was a child or maybe I had some random attachment disorder (kidding… I think). Anyhow, when I first arrived in New Ulm for college, it was all fine and well until the middle of the Kmart parking lot. Yes, you read that correctly. Blue light specials could not stop the sheer panic attack I was having in the parking lot as I held back tears while my parents placed the white shelving unit in the back of the minivan. Because I knew, when we got back to campus, my parents were heading back home, to Illinois… which is like 500 miles away and that’s a really freaking long way okay!!! Geez cut me some slack. While my peers were rejoicing and celebrating freedom, I was crying in the shower with my flip-flops on trying not to touch the shower floor which I was fairly certain probably had some type of disgusting fungus on it. It was rough and I had to wait until 7pm to call my Mom. Hey, it was free calling after 7pm with Sprint back then alright? That’s how it worked… well actually it only worked when I held my head to the screen while touching my flip phone antenna to the metal frame on the window. But alas.

So… it was kind of a big deal when I told my parents I wasn’t moving back home after I graduated; I was staying in Minnesota. And a year later, I think they thought I’d come back home after it didn’t work out with the boyfriend I may or may not have originally stayed in Minnesota for… again, that’s a different story…. But I didn’t. I had started working for the public school. I had made friends. And oh hey, I also bought a house, so that pretty much sealed the deal.

But the reason was, that I had fallen in love with Minnesota. I loved Mankato – hello, Starbucks people. I loved that I didn’t live in Mankato – big towns are not my jam. I loved the slowness of it all. It was where I was supposed to be.  And much to my parent’s dismay, I stayed.

So, what does it feel like to love 2 places?

It feels like I’m always missing something, either here in Minnesota, or back home in Illinois.

It feels like I’m where I’m supposed to be, but yet not.

But at the end of the day, I wouldn’t be happy living permanently in Illinois. The fast paced-ness of it all is just not my jam. So, I’ve come to terms with it all. I’ll go back as often as I can and share my heart in two places I call home.

As I sat at the table the other night, our vacation coming to a close, singing along to Huey Lewis and the News, I came to a realization; it’s one that I’m growing to accept.

Whether I’m in Illinois or Minnesota, I’m always going to be eternally 500 miles short… It’s as Simple As That.