Recently there has been a lot of straight up shenanigans going on and quite frankly it’s culminated in this lovely little literary gem. If you’re reading this and you’re offended, well congratulations and welcome to my world, because I’m offended too; in fact, I’m down right cranked off, so buckle up because I’m about to let ‘er rip tater chip.

To make this (which could easily be the script for a Lifetime movie) short, I’ll get right to the point.

In December 2017, I had the pleasure of organizing a Listening Session with our currently elected officials. They happen to all be from the same party. I’ll give you a hint. They like to sit “to the left, to the left”. Fine fantastic and wonderful. I’ve been told a number of times that the issue at hand, which is child care, is a bi-partisan issue and I believe it SHOULD be. By now, you’ve probably figured out that I lean more to the right. Great, now that we’ve gotten past the formalities, I’ll get right to the point. At the listening session, one of the elected officials said to me and I quote, “We work for you. So, if you don’t like what we’re doing, you can fire us by voting us out at the next election.”

Well, after trying to work across “party lines” unsuccessfully, I have two words for you: Challenge Accepted.

No, you did not read that incorrectly, and yes, this blog post might easily hold the record for the snarkiest piece I’ve ever written. You can hashtag this one under “sorry not sorry”. Here’s the quick version of the long story.

I own an Early Childhood Center. In October 2017, our facility was investigated for maltreatment because a child fell from a slide on the playground. I had no idea A) That a playground accident qualifies as possible maltreatment and B) What my or my amazing teachers’ legal rights were.

Here’s where it gets interesting. I contact our local elected officials. They do their best to get answers from DHS. DHS creates some BS document that explains what maltreatment is and how their process for selection supposedly works. (I say supposedly because the evidence we compiled proves otherwise). We survive the interrogation by DHS. I ask for a Town Hall, the local elected officials state they would rather have a Listening Session. Call it what you want, I just wanted answers. So, they attend. All three of them. There are nearly 40 providers there. Our Senator congratulates me on being cleared of maltreatment even though I had not been told by DHS that I was cleared… so there’s that. (We found out via letter over a week later – insert palm smack to forehead). Fine, dandy, wonderful. So, months go by following this Listening Session. Meanwhile, I decide to prove that DHS is out of control. To do so, I invite my colleague to help me compile public DHS data. It was the best of times, it was the worst of times… it was mainly the worst of times because we literally hated our jobs once we realized you could receive a citation for having glitter on the carpet or chipped paint.

Fast forward to the Legislative Session, where the data is released in a Subcommittee on Child Care Access and Affordability. Throughout the session my colleague and I spend over 20 days at the Capitol and I spent an additional 5 or more on my own because hello, she is a teacher and I couldn’t always find a sub for her. I put 4,000 miles on my vehicle and essentially ran two businesses (I also do consulting for child care because the process for opening a center is complicated and DHS is too busy doling out plunger citations to do their actual job), while spending 10 to 12 hour days at the Capitol. And here’s why.

My livelihood depends on this. My husband and I have all of our (very limited) assets on the line for this business. This is personal. My teachers and our families deserve better. Here We Grow is a family and you don’t mess with family. (No we are not part of the mafia).

Back to the story.

So, we have this data and I’m testifying any chance I get. Including staging a walkout of over 40 providers who then gathered in the Rotunda at the Capitol and walked into a Senate Meeting to be heard.

Now for the fun part. This entire time, our elected officials have the data. We keep emailing it to them over and over with more and more evidence. And it’s damning. The evidence shows an internal issue within DHS amongst other things. I even had people contacting me telling me DHS contacted them to come after our data and testify against it and us. It was terrifying. It still is terrifying.

During this entire session it’s like pulling teeth out of a fire breathing dragon to get our elected officials to take action. Sure, there were cute words and pats on the head. And “You’re so great Beth. You’re the best citizen lobbyist” type email awards. And I’ll admit those are nice words to hear. But talk is cheap when you have a government agency not only on your A double S, but up it. So, I was getting pretty annoyed; actually, I was downright pissed.

But the icing on the cake for me, was watching one of our elected officials tell me during a committee hearing and I quote, “I can give you my phone number and you can call me when licensing shows up.” About that… I need someone to hold DHS accountable, not hit me up with their digits. This isn’t “Who Wants to be a Millionaire” and DHS isn’t going to wait at the door while I phone a friend.

But whatever, by this time I’m used to this type of treatment on what is supposed to be a “bi-partisan” issue. Apparently, Child Care isn’t inline with the agenda of that particular party. (For those of you just tuning in, the party that resides “to the left, to the left”).

Fast forward to the end of the session. By this time, a number of elected officials have reached out to help us. (sppst, they sit to the right).  And not only help us but invite us in to their offices to help us with a strategy to protect ourselves and out the truth…. Because we have data…. DHS data… data that DHS themselves refused to compile because it would “take far too long” (they told us as they laughed during a meeting we were invited to with the Deputy Inspector General of Licensing). Listen lady, we’re fully aware it will take a long time to compile, because we did it, while holding down a day job. So spare me the classic government excuse of “we don’t have the resources”, because nobody has time for that.

So now it’s time for a lesson in reality. My reality is that I live in fear of a government agency. My other reality is that my elected officials didn’t help at all. They ignored DHS data, because it turns out (and yes there’s video evidence of hearings and I also have emails so if you’re reading this I’d be careful how you proceed if you intend to slam me). As I was saying, it turns out Child Care is a bi-partisan issue.

Which brings me to the purpose of this little gem of a piece you’re in the midst of reading. I decided to take their advice. The advice of my currently elected official who said, “We work for you. So, if you don’t like what we’re doing, you can fire us by voting us out at the next election.”

Well, this awkward. Sheesh. I didn’t like what you did, or rather didn’t do, so now I’m working to vote you out, because I contacted your opponent and in less than 24 hours we had a meeting set up. He listened, took what I said to heart and made it a goal to learn more about it. He rode to a Senate hearing with us as providers, and even set up a Town Hall on Child Care.

And here is where you went wrong, so you might want to take notes. The Town Hall is scheduled for June 6th. For some reason, you decided to decline the invitation claiming the event was not bi-partisan, at least from what I gather based on your lovely Press Release. Instead, you called on a third party, essentially challenging them to hold a Town Hall on Child Care, offended a number of us early childhood educators by referring to us as “service providers” and then used an underlined sentence to CALL OUT the original hosts to the June 6th Town Hall and accused them of politicizing child care.

Here’s what it sounded like to me: “I triple dog dare you to hold a Town Hall Meeting Greater Mankato Growth. And I quadruple dog dare you Republicans to attend, or else I’ll tell everyone that your politicizing child care”.

So here are my thoughts. I’m tired of being treated like a second-class constituent. Even AFTER I attended (upon invitation), The DFL Burton Dinner (to talk about Child Care which is supposedly a bi-partisan issue), and at which I was ignored by all of the currently elected officials. And might I add demonstrated the true colors of the Blue Wave. The highlights of the event were my lovely friend (who is an amazing human and proves there are actually some on the left who aren’t totally out of touch with reality) who invited me and also seeing ass cookies. Yes, that’s right, cookies in the shape of an ass (Exhibit A). Because let’s be real, the concept of eating an ass cookie is just hilarious, regardless of the animal that represents your party.

I leave you with this question. “If Child Care was a bi-partisan issue that should not be politicized, then why did I watch you vote ‘no’ on the Floor of the House and why did you ignore the public data, only calling for a Town Hall Meeting AFTER someone else did it? If you cared so much, why didn’t you take action?”

Until then I’ll sit here eating my good ole American chocolate chip cookie while I map out my game plan to help vote you out.

You held up your part of the bargain. It’s only fair I hold up mine: Challenge accepted. 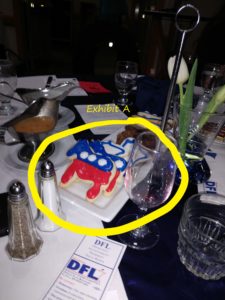